Kim? Contemporary Art Centre proudly announces its first exhibition abroad within Latvian Centenary Program – a solo show by Finnish-Israeli artist Dafna Maimon at SIC artists’ space in Helsinki, Finland. The exhibition will be on view from February 3 and will later open on April 20 in Riga, its final destination. One of the themes unfolded in this exhibition is the experience of society making headway towards tolerance and togetherness which are qualities of great importance in the context of the Baltic Sea Region, Europe and the globe. 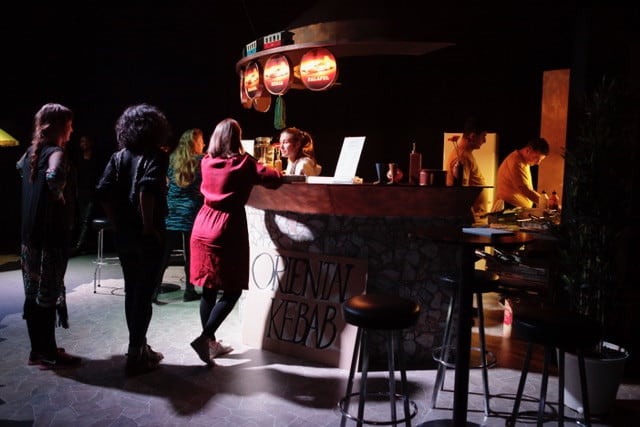 Family Business is the third in a series of exhibitions and performances inspired by autobiographical and micro historical research into a family-owned business - Finland’s first kebab and falafel restaurant Orient Express, opened by the artist’s Israeli father in 1985. Located in the Forum shopping mall in Helsinki city centre, the restaurant introduced Finns to the delicacies of the Middle East.

Some years ago, Maimon found a rather strange high-budget video ad from 1986 that her father had produced, which used his own exoticness in a high-paced narrative to market kebabs in Finland. Starting from this video-relic and her childhood memories, the artist has now reworked the commercial and reimagined the restaurant.

Today, Orient Express exists in a world beyond capital. The restaurant was first reconstructed in Lilith Performance Studio as the performance Orient Express Yourself, where it was equipped with a functioning kitchen, complete with trained “restaurant workers” whose task was to sell falafel in exchange for the audience’s own words. The customers paid prices ranging from 15 to 299 words, and answered questions relating to memories of family and gender roles, as well as the effects of destructive patriarchal structures. Their amplified recollections enabled a semi-shared and intimate space between strangers.

A few months later, Orient Express expanded its operations to Galerie Wedding, where the installation functioned as a ghostly memory of the long-gone restaurant. There it sold falafels to the audience only on the opening, where the word-payment was recorded into an old tape recorder. For the finnissage the restaurant catered to people again with the performance After Hours. Maimon scripted an absurd movement score based on restaurant chores a worker performs when closing up for the night. One chore was to count the takings; the words collected at the opening were played back within the performance as further fragmented memories to a new audience.

Now Orient Express has finally returned to Finland, 33 years after its initial opening, as the exhibition Family Business. At the opening event at SIC Space, the new mutation of the restaurant will serve falafel cooked and sold by the artist’s actual family members - her siblings.

As its next stop, following the course of the artists family history (one of the family’s businesses also operated in Riga in the early 2000s), the restaurant will branch out to Kim? Contemporary Art Center in Riga, where it will open in yet a new mutation as a performative space where collected local memories have been transformed into a script.

The idea of a family business could be an overarching way to describe the artist’s work; she creates temporary small-scale communities that challenge stereotypical constructions. Through these communities, Maimon studies the very same elements her work materializes through; affect based constructions and their economies.

The exhibition in Helsinki is being opened to the public at 18:00 on February 2nd and will be on view from February 3 to March 4.

In 2018, Latvia celebrates a hundred years since it became an independent state. With festivities at home and all around the world, Latvia will present the best it can offer in culture, lifestyle and innovation. The culmination of the Centenary celebrations will take place on November 18, 2018, the date marking Latvia’s 100th anniversary. However, a diverse cultural, educational, diplomatic and multi-disciplinary events programme will take place throughout 5 years. The centennial’s international program outside of Latvia will be comprehensive, comprising a cultural, economic and political dimension.

In 2018 Kim? Contemporary Art Centre is organizing four ambitious exhibition projects within the Latvian Centenary Program that will be taking place in Helsinki, Paris and the capital cities of the Baltic States.