This year Orkester Norden (ON) celebrates the 100th anniversary of Finland with an impressive line of concerts in Denmark, Latvia, Estonia, and Finland by the name Orkester Norden ’17 celebrates Finland. Conductor Johannes Gustavsson will lead the orchestra through a variety of great pieces including Sibelius, Byström, and Elgar. Soloists are world-famous soprano Susanna Andersson and cellist Jakob Koranyi. 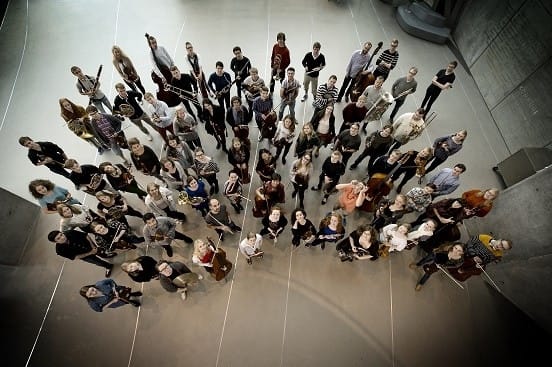 Orkester Norden is a talented youth symphony orchestra composed of musicians aged 15-25 from the Nordic and Baltic regions. The musicians either attend a music conservatory in the Nordic or Baltic region or they are citizens in these regions. Thus here, you will find the stars of tomorrow. The orchestra meets every summer to rehearse in the host city – now it is Musikkens Hus in Aalborg, Denmark. After weeks of rehearsals ON plays goes on a tour, giving several concerts in different countries, each year with an accomplished conductor and splendid soloists.

This year, the conductor is Swedish Johannes Gustavsson who knows Orkester Norden particularly well since he himself has been a member of the orchestra, playing the viola. Today, Johannes is chief conductor of Wermland Opera in Sweden and regularly works with the Helsingborg Symphony Orchestra. Johannes has held senior conducting posts at the Västerås Sinfonietta, the Nordic Chamber Orchestra, and at the Oulu Symphony Orchestra.

We are very proud to present two international, star soloists soprano Susanna Andersson and Jakob Koranyi on the cello, both known all over the world for their magnificent musicality.

Susanna Andersson is born in Sweden and is praised for her beautiful vocal. Susanna has had big rolls in a vast number of opera houses in many parts of the world and has performed with many prominent orchestras, among others Copenhagen Phil, Helsinki Philharmonic, and BBC Concert Orchestra.

Also, Swedish musician Jakob Koranyi has impressed the critics with his elegant and light style. Jakob has established himself as one of the most interesting, young soloist on the classical scene in Europe with performances in Barcelona, Paris, and Vienna, etc. In addition to performing with Orkester Norden in 2017, Jakob will play concerts with Orquesta Filmharmonica de Bogata and the Royal Stockholm Philharmonic Orchestra.