A meeting-presentation by kim? Residency Award 2017 recipient Ieva Kraule will take place at 4 PM on June 24th, in the residency space of London’s Gasworks as part of Open Studios. The artist will look back at her achievements in the three month residency at Gasworks, the international exhibition, studio and residency programme. 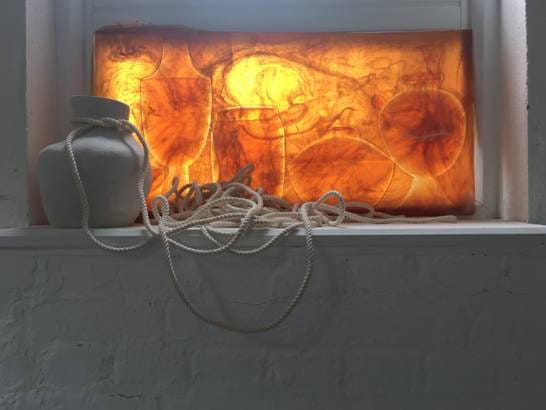 During her residency, Ieva Kraule continued to work on her started automaton - a device created by the artist as a tool to perform – pass on her written texts to the audience. This device was introduced in Ieva Kraule’s solo-exhibition α: Deceived Deceivers at kim? Contemporary Art Centre this past March-April, its technical process is based on the artist's interest in exploring the potential of the relationship that might exist between the artist and the machine, and how that dialogue changes as time progresses. During the process, the artist focused not only on the mechanical evolution of the device, but also on the research of what the role of this robot-slave could be in the continuation of her artistic practice.

Ieva Kraule: “During the Gasworks residency I have been simultaneously working on my Masters degree exhibition at the Sandberg Institute in Amsterdam, entitled “Gorgoneion's Gaze”, which will open at Gallery Stigter van Doesburg on June 22nd in Amsterdam. For this reason, part of the work created for Open Studios will not be available, yet their footprints – documentation will remain (photo/video/audio) in combination with my comments and by-products of the development."

The annual kim? Residency Award is an opportunity for a single Latvian artist or a group of two artists to take part in a residency program with one of kim?'s partner organizations. The first winner of the kim? Residency Award, in the summer of 2015, Darja Meļņikova spent two months at KW Institute for Contemporary Art in Berlin, while the second – Ieva Epnere – in the autumn of 2016, had the opportunity to spend two months at the International Studio & Curatorial Program (ISCP) in New York. The winner of the 2018 Award will head off to the new art programme ArtPort in Tel Aviv.