The Latvian Centenary was celebrated with a rich programme of events all weekend long in Riga, throughout Latvia, and in 37 countries around the world. Latvia received countless greetings and salutations from friends and allies, and the presidents of Estonia, Iceland, and Finland participated in Latvia’s Centenary celebrations. 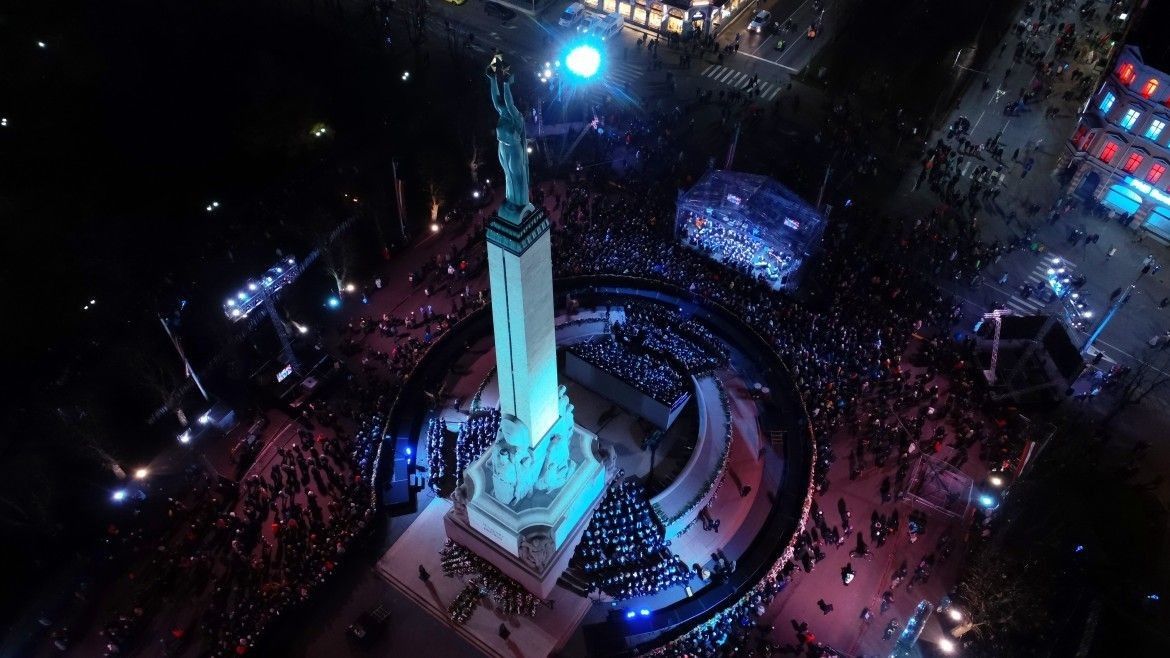 The 100th anniversary of the Proclamation of the Republic of Latvia has become one of the most widely celebrated state holidays.

More than 91% of Latvia’s inhabitants planned on participating, according to a survey carried out by Kantar TNS. The organisers estimate that more than 400 000 people participated in celebration events. A special gift of traditional patterned Latvian mittens was given to the 61 babies born this year on 18 November, including a pair of twins!

The greater part of the 900 celebration events were open to the public free of charge, and special events were held in each municipality. The celebration organisers accomplished a great deal planning the Latvian State Centenary programme of events for the culmination weekend. Events were intentionally planned for different times of day, and many styles of celebration in various locations. The 18 November programme of events for Riga was planned jointly by the Chancery of the President of Latvia, the Latvian Parliament, the Ministry for Defence, the Ministry for Culture, and the Riga City Council.

Throughout Latvia, the morning of 18 November began with raising the Latvian flag and singing the Latvian National Anthem. The largest flag—measuring 800 square meters, nearly the size of two basketball courts—was raised over the Latvian Television and Radio tower. Using the heavy-lifting drones they developed, Latvian drone manufacturer Aerones simultaneously lifted 100 Latvian flags into the air. Special Morning Salute to Latvia events took place in Alsunga, Kolka, Turaida, Gaiziņkalns, the Mežotne Hillfort, on the shores of Lake Rāzna, and in Riga by the Freedom Monument and at Dzegužkalns.

The celebration programme included concerts and exhibitions, the traditional military parade, honour guards, and various events inviting people to honour the history, values, and accomplishments of the first hundred years of the Latvian state and find inspiration for the new century.

Most municipalities held events honouring their citizens in line with the centenary message “I am Latvia”. Many people also celebrated through sports activities, running, orienteering, and educational events and topical quizzes. Movie lovers could enjoy the wide variety of Latvian Centenary films.

The musical event 18.11, which took place at the Freedom Monument in Riga was a particularly emotional part of the celebrations. The images depicted on the Freedom Monument were referenced to tell the history of Latvia and celebrate Latvian values through song and poetry. Many well-known Latvian entrepreneurs, athletes, musicians, and other cultural and social actors participated in the event. The traditional Armed Forces parade honouring and celebrating Latvia’s soldiers was another central event, as was the light show and fireworks exhibition Saules Mūžs [The Life of the Sun] watched by thousands from the 11th of November Embankment. Special emphasis was placed on evening events—free concerts were held in the churches and concert halls of Riga’s Old Town, the show Latvija’s dzimšanas dienas nakts [The Night of Latvia’s Birthday] had its premiere at the Latvian National Theatre, and Riga night clubs and other entertainment venues celebrated with Latvian music for Centenary Club Night.

“With powerful emotion we have celebrated Latvia’s hundredth birthday thanks to the ideas, initiaitves, and events many hundreds of people helped realise—whether through making family trees, knitting colourful mittens for children, organising centenary events at school, or composing a new music for Latvia—many people gave these gifts from the heart. We can take special pride in the projects with lasting value: the young oaks planted around the Latvian boarder, the Latvian Films for the Latvian Centenary programme, the new works by Latvian Composers for Latvia’s Centenary, the nuanced Latvian Ring programme cycle honouring the cultural and historical distinctiveness of Latvia’s many regions, outstanding art and history exhibitions held in Latvia and abroad, new opportunities for our authors in the world’s book fairs, and a convincing start to the 100th season for the Latvian National Opera and Ballet and the Latvian National Theatre! A number of centenary initiatives are still going on in full force, including the Latvian School Bag cultural programme for children and the preparation of the new Latvian National Encyclopedia. In the first year of Latvia’s second century we will honour more of our national cultural and educational institutions—the National Library of Latvia, the University of Latvia, and the Academies of Music and Art—as we await their 100thanniversaries. And, together with the Ministry for Defence, we are developing an educational programme to mark the the Latvian War for Independence and the 100th anniversary of the formation of the Latvian Army. But today I would like to offer my heartfelt thanks to the all those who organised, participated in, and experienced the November 18th celebrations, and to all those who have been and continue to be together with Latvia in their thoughts and deeds, in our day-to-day lives, and when we celebrate!”, said Latvian Minister for Culture Dace Melbārde. 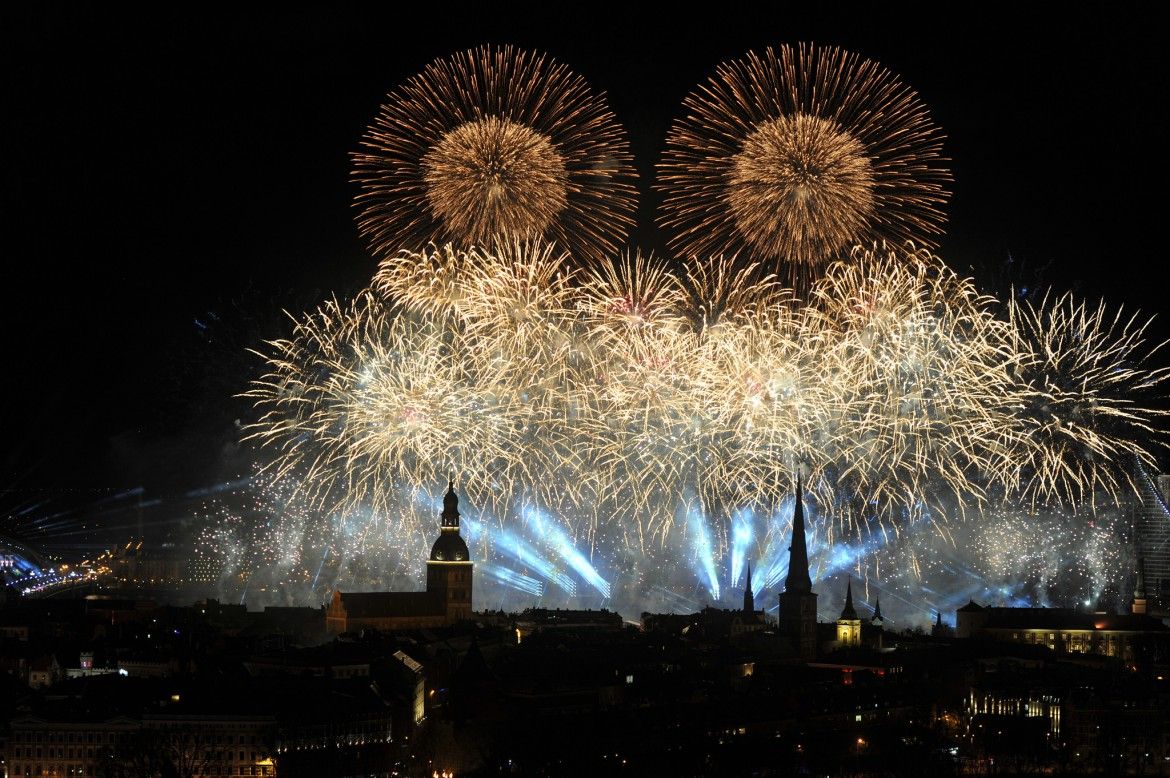 From 16–19 November Latvians and their friends and families around the world gathered to celebrate the Latvian Centenary in Australia, Austria, Belgium, Canada, the Czech Republic, Estonia, Finland, Great Britain, Germany, Ireland, Italy, Luxemburg, the Netherlands, Norway, Spain, Sweden, Switzerland, and the United States.

International events included receptions, exhibitions, and concerts with the participation of Latvian musicians who live in these countries. A rich programme of events took place in other countries as well, prepared by Latvian embassies, consulates, and diaspora organisations the world over.

In the run up to the day and on 18 November, Latvia’s friends and allies sent their greetings and salutations by lighting up various architectural structures and natural features in the colours of the Latvian flag. Latvian red, white, and red illuminated Three Cross Hill and two city bridges in Vilnius, Stenbock House, Freedom Square, and Tartu Street in Tallinn, the Estonian National Museum in Tartu, Niagara Falls on the US/Canadian border, the Morrison Bridge in Portland, Oregon, San Francisco City Hall and Los Angeles Grand Park fountain in California, and various objects in Canada—the Hamilton city sign and Ontario City Hall in the province of Ontario, the Toronto city sign, Canada’s TV CN Tower, BC Place in Vancouver, and the High Level Bridge spanning the North Saskatchewan River in Edmonton, Alberta. Latvia’s colours also lit up the north face of Finland’s Ministry of Foreign Affairs in Helsinki, Tel Aviv City Hall in Israel, Poland’s Presidential Palace in Warsaw, and the Lighthouse in Genoa, Italy—the third tallest and second oldest working lighthouse in the world. And in Brussels, Belgium the city’s landmark sculpture Manneken Pis was dressed in a Latvian folk costume.

Now that the celebrations have passed, event organizers and all those involved in designing Latvia’s centenary will meet to analyse the outcome so that lessons learned can be applied to future events.