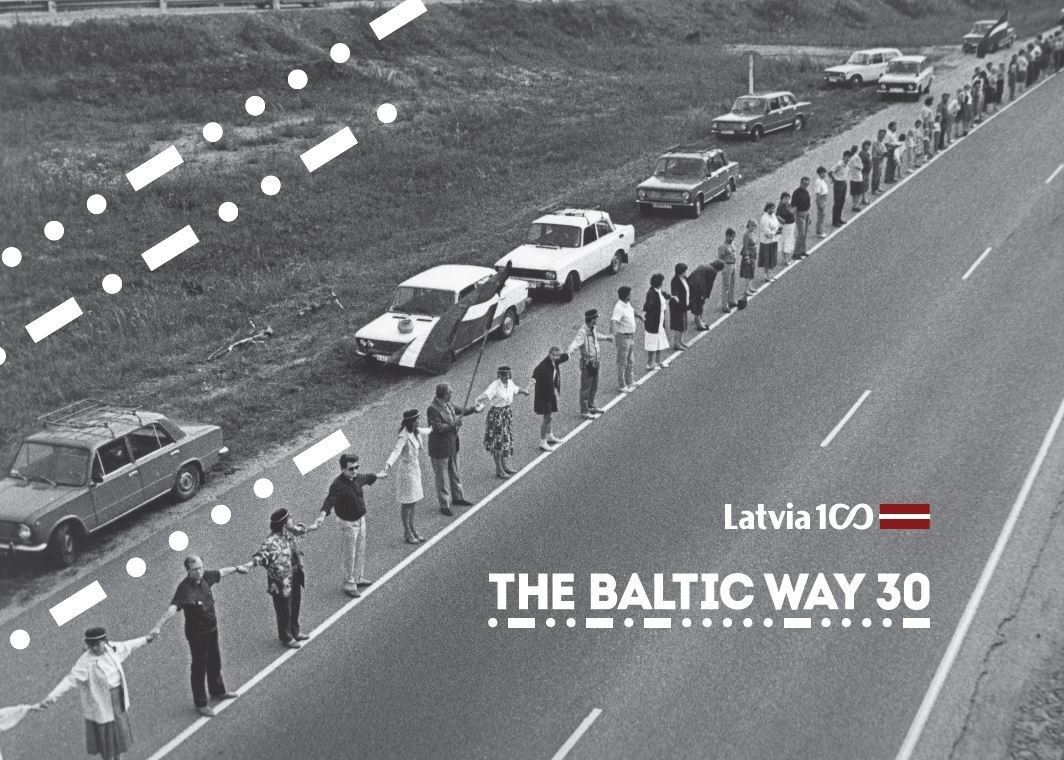 On the 23rd of August 1989, approximately two million inhabitants of Latvia, Lithuania and Estonia joined hands and connected the capitals of the Baltic States, Tallinn, Riga and Vilnius to commemorate the Molotov–Ribbentrop pact signed by Germany and the USSR on the 23rd of August 1939. It was a powerful gesture designed to strengthen each other in the fight for a common goal – to regain the independence of the Baltic States. People of different ages, nationalities, religions and social groups participated. In 2009, UNESCO included the Baltic Way in its Memory of the World Register.

The goals of the 30th anniversary of the Baltic Way are:

A photography exhibition from the collections of the national archives of Latvia, Lithuania, and Estonia.

Organised by: The National Archive of Latvia in collaboration with the Ministry of Culture of the Republic of Latvia

The aim of the conference is to look at the importance of the role played by the Baltic Way in regaining the independence of the Baltic States and eliminating the consequences of the Ribbentrop-Molotov Pact as well as links to the Baltic Way and its possible impact on democratic revolutions in Eastern and Central Europe, including the fall of the Berlin Wall. Furthermore, specific features of community activism today, populism, and their respective influences on current political process and the future of liberal democracy will be debated by politicians and public activists from the Baltic States, Germany, the Czech Republic, Poland and Sweden.

Organisers: The Popular Front Department of the Latvian National History Museum in co-operation with the Ministry of Culture, the Ministry of Foreign Affairs, the association The 4th of May Declaration Club, the National Library of Latvia and the Konrad Adenauer Foundation.

The Baltic Film Festival is an initiative, created and jointly organised by the three national cinema institutions – the National Film Centre of Latvia, the Lithuanian Film Centre and the Estonian Film Institute for the purpose of strengthening co-operation between the three Baltic States in the field of cinema and promoting information about each country’s films to its neighbours. This year, The Baltic Film Festival will take place at the Grand Hall of the Splendid Palace cinema, featuring two films each evening, free of charge. At each session, there will be an opportunity to meet with the films’ creators.

Organised by: The National Film Centre of Latvia

The National History Museum of Latvia

The period of national re-awakening, like other periods of rapid change, was a time of strong resolve and ideals. The ideals that came to the fore were rooted in previous experience – historical memory, statehood experience, including a deep affiliation to the local cultural environment fuelled and fortified by Soviet-era opposition and even a kind of local sentimentality. One of the features is a time-line of the major developments of the late 1980’s. Another focus is on the restoration of the national state symbols as well as changing the historical memory of society during this period. Various exhibits reflect radically different visions of Latvia's future, as well as various human reactions – both adaptation and preservation of principles at a time of great change.

A solemn commemorative event with participation of the President of Latvia, activists of the Popular Front of Latvia and musicians.

Organised by: The Latvian National Centre for Culture in collaboration with the Ministry of Culture

The story is based on a Latvian folk tale about Kurbads. The central themes of human resolve, the path of self-development, a battle with one’s internal and external demons, initiation – have not lost their relevance today. This Metalopera is a 21st century re-imagining. It received only one performance in Limbaži in the summer of 2017 becoming a cult legend in Latvian culture, enjoying the critical acclaim of both the general public and professionals. Performed by the folk-metal group Skyforger and contemporary dance performers.

Organised by: The City of Riga in collaboration with Story Hub, Gig Service

On August 24 come and join the 35 kilometres long bicycle ride from Karksi Nuija (Estonia) to Rūjiena along the path of the Baltic Way followed by the concert of the chamber choir “Cat” concert.

24.08. | Beethoven's Eroica symphony with CARION and the LNSO

Composers from Latvia, Denmark and Sweden each created one part of a three-part new work dedicated to the Carion quintet and the Latvian National Symphony Orchestra. Andris Dzenītis has dedicated his piece Delta Returning to the 30th anniversary of the Baltic Way. The Carion quintet is known to Latvian audiences for its dynamic performance style, without sheet music and with choreographed movement.

The concert will feature melodies and songs that are important to Latvia’s people and associate with awakening.

Organised by: The Association for Latvia in collaboration with the Koknese Foundation

// LEARN MORE ABOUT THE BALTIC WAY

Eyewitnesses of The Baltic Way

The Routes of Latvia's statehood - The Baltic Way

The Baltic Way: 30 years on from a day that changed history

Created and done by: Various organizers